The Ballito Magazine
The Ballito Magazine
Seattle Coffee Co has been around for longer than we all realise, specificallyserving up the perfect cup of Joe to our Capetonian siblings, whereas, KwaZulu-Natal opened its first branchin Pietermaritsburg in 2013, this also being the first branch which brothers-in-law, and business partners, Warren and Blaike, took over and subsequently opened their eyes to the need for such an amazing ‘roast’ in the rest of the province. After acquiring the franchise for KZN, theyventured into... 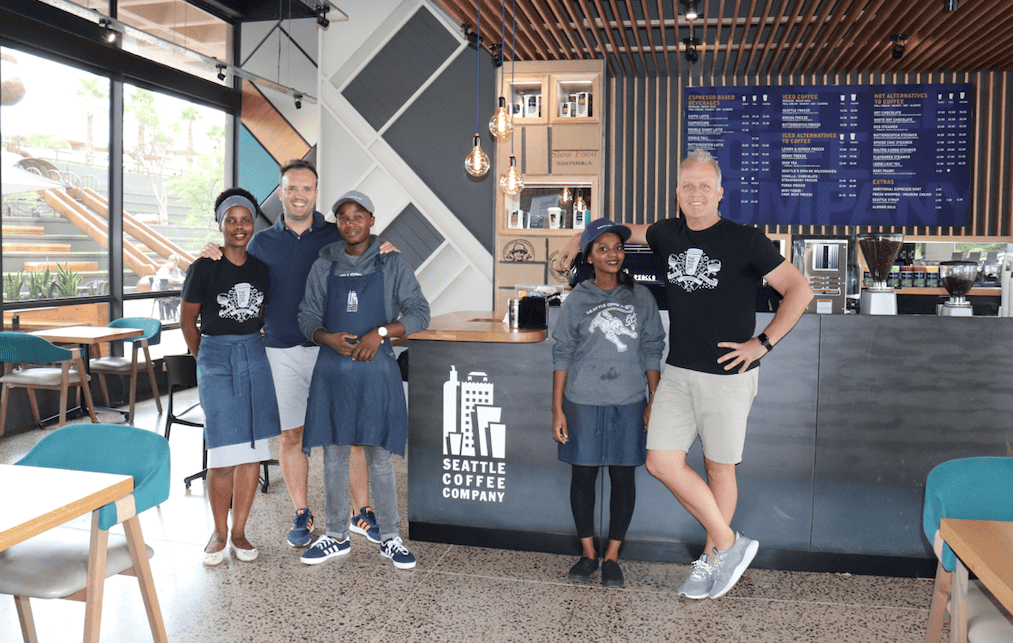 Seattle Coffee Co has been around for longer than we all realise, specificallyserving up the perfect cup of Joe to our Capetonian siblings, whereas, KwaZulu-Natal opened its first branchin Pietermaritsburg in 2013, this also being the first branch which brothers-in-law, and business partners, Warren and Blaike, took over and subsequently opened their eyes to the need for such an amazing ‘roast’ in the rest of the province. After acquiring the franchise for KZN, theyventured into Gillits, opening their second branch of Seattle and the ball started rolling from there! The Virginia Seattle in Durban North was set up five years ago as the first large ‘coffee shop’ style Seattle in the province, and they are still serving up creamy cortados to their blurry-eyed customers on a daily basis today!

Fast forward 25 stores later and some very happy caffeine connoisseurs, and I can honestly say, whether I am working at the Medstone Centre’s Seattle or Park Square’s gorgeously designed hideaway, I am always fulfilled with strong Wi-Fi and even stronger coffee thanks to their perfect blend of coffee from the guys at Union Roasteryin Cape Town.

So yes, I mentioned that I followed them around, imagine my delight when, in November 2018, I walked past our Exclusive Books at the Ballito Junction and saw that a Seattle had secretly popped up! If you ever need to find me, you know where to look. It was as if someone was listening to me up there and by December 2018,the Seattle Coffee Co. sign was smiling down at me from their new location at the Zimbali Wedge! Yes, we now have two stores,Ballito!

Why Ballito I ask: “Everyone was asking us and it’s obvious that Ballito is one of the fastest growing areas in the country, so why not!”

Are they thinking of stopping now? Definitely not! They are looking at opening six more stores just this year! I really love how this dynamic duo is introducing our province to a world of coffee that people never knew existed! “As long as there is a demand, we will be offering our coffee into areas that we know will enjoy it and will support us. We opened about seven stores in four months last year, so we are still reeling from the excitement! We want to make sure we look after the stores we have now and open the rest one by one, ensuring the best design, staff and products are coming out of each branch.”

Why Seattle? Warren, funnily enough, had a Seattle Coffee Co. by chance in Sun City when he was living and working there and when he decided to come home to KZN, he and Blaike saw a gap in the market and approached the owners of Seattle South Africa, Peter Howie and Barry Parker, whosaid they would love for the Seattle Coffee Co to be brought into our province- fate? I think yes!

Barry and Peter are still very much in charge and hands-on with over 200 stores nationwide, they make coffee their main focus- they do ‘cuppings’ almost everyday where they test and taste beans from all over the world. Union Roasteryroast the beans in Cape Town at their Roastery and have their own guys travelling the world, buying the best beans out there.

To make the coffee that keeps people coming back for more and more, means that their staff go through rigorous training, they know everything that makes the perfect coffee and have the most gorgeous imported coffee machines working like finely-tuned engines. Baristas go through a six week training course and various assessments just to ensure that what the customer holds in their hands, is the best coffee they can possibly produce!

One other thing that stands out for me in every Seattle is the incredible design of each unique branch, they are absolutely on-trend and eye-catching! “COA Architects and designers are Cape Town based and they design all the stores for us, improving every time and making each store have their own unique qualities”.

Working as team, Warren and Blaike, keep their finger on the pulse at all times to make sure our own KZN stores are on par with the rest of the country and that they create a bit of a following. With their early opening hours, to feed the ‘need’ before work and school runs, their easy working spaces, delicious croissants (chocolate, please) and like I said, coffee that any pundit would be proud of, Seattle Coffee Co is the one, the only, the master of the velvety liquid of which I adore!

A Day in the Life of a Mixologist