The Ballito Magazine
The Ballito Magazine
Kicking, rolling, crawling, and weaponry right here in Ballito… Not many people bear a name that reflects their looks, but Onyx, with her jet black hair and gemstone eyes, is one of them. Not many people have their black belt in the ancient art of Kung Fu either, but this nine-year-old is one of only a handful of people in the world who does. She walks up, bold and calculative, and kicks the punching bag... 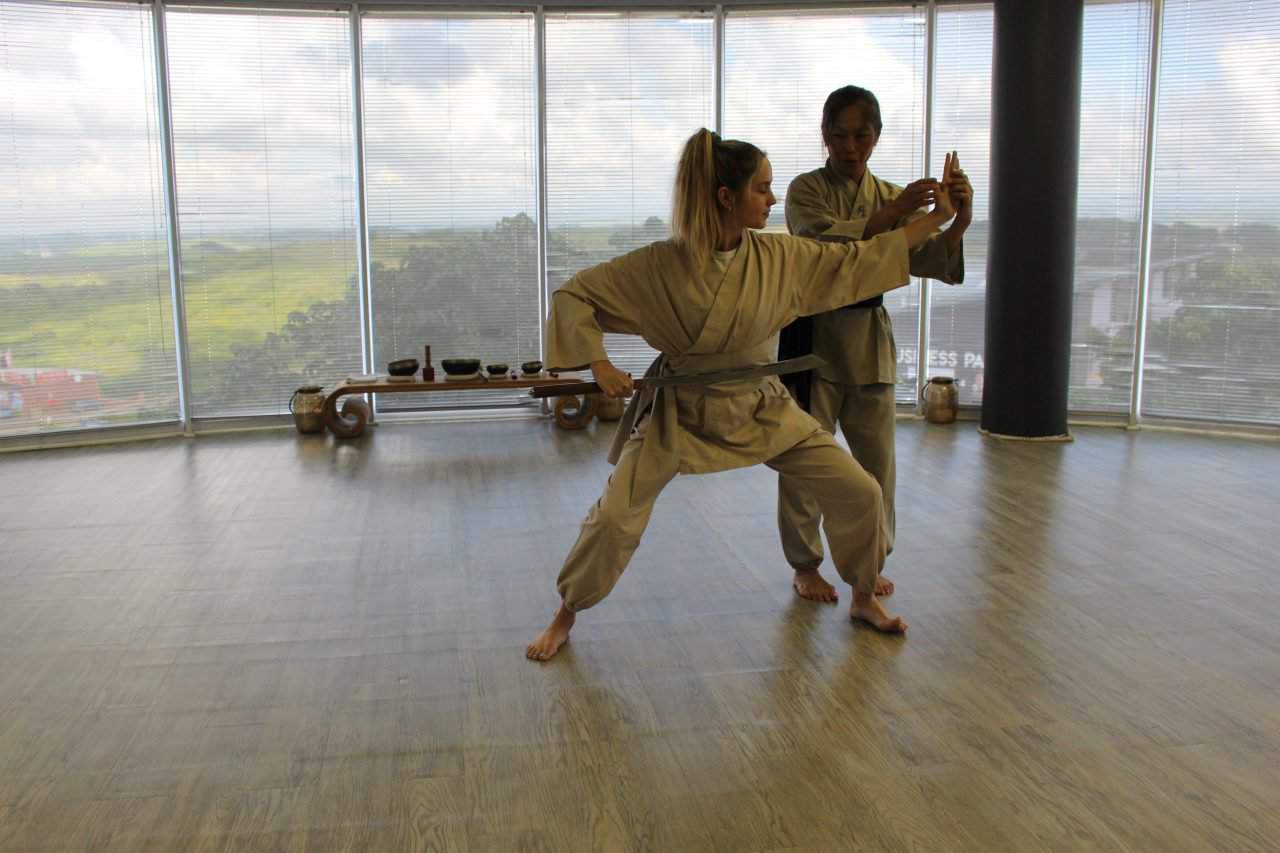 Not many people bear a name that reflects their looks, but Onyx, with her jet black hair and gemstone eyes, is one of them. Not many people have their black belt in the ancient art of Kung Fu either, but this nine-year-old is one of only a handful of people in the world who does. She walks up, bold and calculative, and kicks the punching bag her father holds up with the might of a grown man and the precision of a Swiss train conductor. Noelle, a splitting image of her daughter, twirls and kicks the bag too – and the mother-daughter duo take turns striking it with force and exactitude. I look down at my own reddened shins and toes, after just a few (weak and clumsy) kicks myself. I am currently experiencing a day in the life of a Kung Fu fighter – but in the process I am blown away (like that punching bag) by this family’s incredible story. 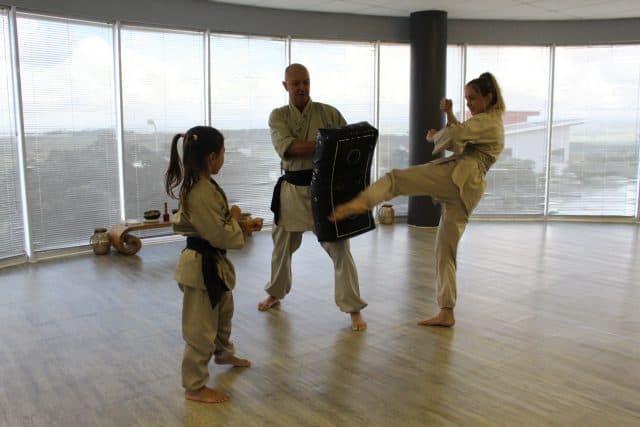 “Our story goes back about 50 years”, Les, who’s originally from Zimbabwe, tells me. “Martial Arts is all I’ve ever been able to think about, so I went to the Far East and spent 25 years on the Coast of China where I met Noelle”. He informs me of their shared quest to chase down the original Martial Arts. “In looking for the original way of Chinese Kung-Fu, we unwittingly became the sole researchers of historical Chinese Martial Arts of Stealth – you know – the Art of the Ninja”, he says. Noelle and Les both did an apprenticeship of 20 years with a Master of this ancient Kung Fu, and when he died, they became the hereditary masters of the style. They have travelled far and wide to teach their art, and now find themselves happily settled in Ballito.

Noelle and Les moved here ten years ago, had Onyx, and opened the Zen Centre in 2014. As international Masters, they managed to get hold of the historical documents about how children were trained in Kung Fu thousands of years ago, and developed the children’s program which they run today. “The kids who practice Kung Fu with us are miles ahead of the game, learning the kinds of moves that only existed in ancient history”. Onyx is currently doing her apprenticeship with her parents. “She is above and beyond what each of us will ever be”, her parents say proudly.

“I don’t go to school”, Onyx tells me in a gentle but confident voice. “I do my learning at home and my mom and dad teach me Chinese, Maths, reading, things like that, and then we go to Kung Fu.” Noelle adds that her daughter’s learning is unorthodox.  When I ask what she’s interested in, Onyx says “dinosaurs, mermaids and aliens”. I decide that Onyx is the coolest little girl on the planet – and this is even before I’m told about her black belt in ancient Kung Fu. “To get her black belt, Onyx had to fight 19 people in a row, including us, for a full hour, without gloves. And they pound her; it’s full contact. She was allowed to cry, but not allowed to give up”, Les tells me.

Noelle and Les themselves are up at 4am, stretching and practising Kung Fu to be able to perform demonstrations for their various classes starting at 2pm each day. They both eat clean, following their own adaption of intermittent fasting – with Noelle sometimes fasting for up to 7 days at a time! On top of adult training, they teach 82 juniors from 6-16 years old, and a few are almost ready for their black belt. “These kids move expertly”, Les explains. “They spar, punch, crawl, jump obstacles – it’s phenomenal. And Onyx is not only one of them, but number one. But let’s see how long that lasts”, Les jokes, and Onyx gives him a sharp look. He explains that Kung Fu or Martial Arts is different in the East than it is from the West. “In the west it’s all banging chest muscles and bragging rights, but the oriental way is humble. We strive to keep up that humility in our studio”, he explains. Noelle adds that they “see a deep change in students after two or three years, as they become more humbled and disciplined.”  “We’re not trying to turn anyone into killing machines”, Les says, “We are just trying to instil the drive and the grit that seems to be missing in today’s youth.” 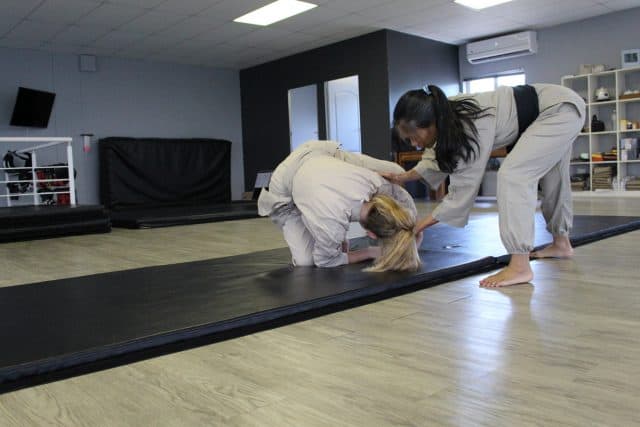 On that note, it’s my turn to get geared up! I am taught how to roll, kick, and even how to hold and swoosh around a real sword, and a deadly spear with real horse hair. As cool as I may feel, I am also terrified by the weapons I am holding, and the pain I am inflicting on my poor phalanges. I am even more humbled when Onyx dives neatly over a stack of blocks that’s only a few centimetres shy of her height. The whole accord is exhilarating and for a moment, I feel bigger than myself, away from my nuclear life and 9-5, experiencing something rare of the ancient world. But hey, without said 9-5 I wouldn’t be having this experience at all! There are some extraordinary people living in Ballito, and it’s a privilege to have met three of them. 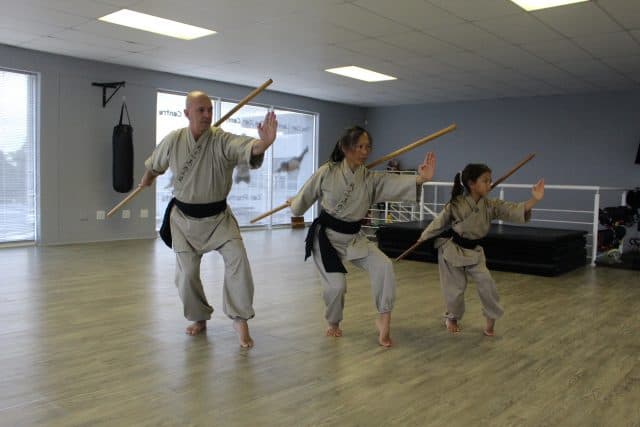